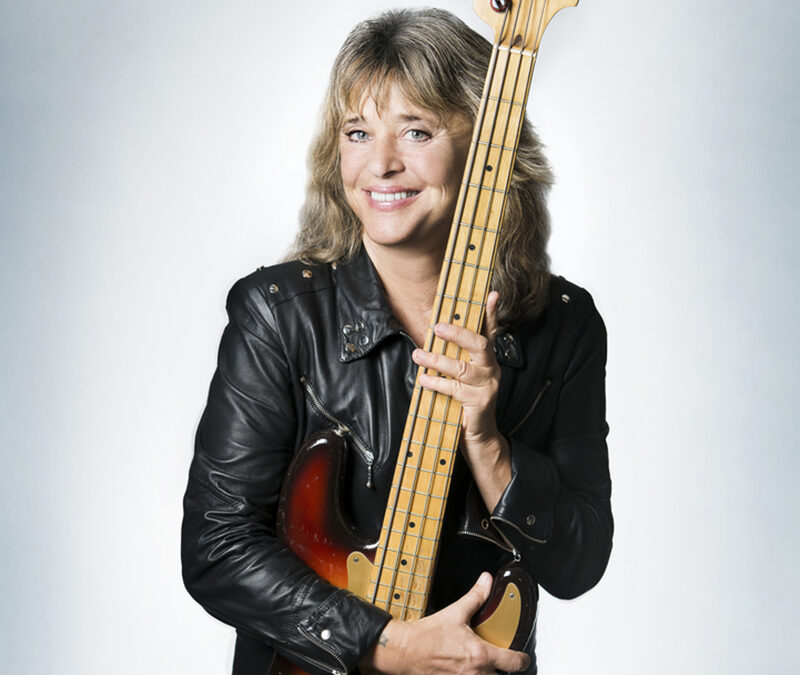 The legendary, highly influential Rock ‘n Roll superstar, Suzi Quatro. Suzi made her stage debut playing bongos in her father’s jazz band, the Art Quatro Trio. At 14, she co-founded the all-girl band, The Pleasure Seekers, with her elder sister, Patti, playing a bass guitar that was as tall as she was. Suzi quickly became the band’s lead singer and front person.

They successfully toured for 7 years before changing their name to Cradle. The group was then seen by the successful music producer, Mickie Most. He offered Suzi a solo contract, which eventually led her to working with the hit-making songwriters Nicky Chinn and Mike Chapman, resulting in her first huge hit, Can the Can, which went to number one in Great Britain, Europe, Japan and Australia, and sold 2.5 million copies worldwide.

Suzi has sold over 55 million records. Among her numerous worldwide hits are: 48 Crash, Devil Gate Drive, The Wild One, She’s In Love With You, If You Can’t Give Me Love, and Stumblin In, a duet with Chris Norman.

Among Suzi’s many other creative endeavors: she made her critically acclaimed West End debut in 1986 playing Annie Oakley in Annie Get Your Gun. She wrote music and lyrics with Shirlie Roden for the Tallulah Bankhead musical, Talullah Who?, in which Suzi starred.  She’s even had her own radio shows on BBC Radio 2 since 1999.

Her bestselling autobiography, Unzipped, released in 2007, was turned into Suzi’s one woman show which premiered at London’s Hippodrome.

In 2016, Suzi released a book of poetry called Through My Eyes. In 2022, she released a second volume of poetry entitled, Through My Heart, Steve highly recommends. Through My Heart is powerfully personal, moving, intense, and quite deep. Suzi writes with passion and conviction, very much from her heart.

Her first novel, The Hurricane, was released in 2017, and she’s already at work on the sequel.

Suzi continues to tour and release new albums, including 2019’s No Control, a collaboration with her son, Richard Tuckey, who co-wrote most of the tracks and played guitar. On her latest album, Uncovered, released on Sun Records, Suzi covers 6 classic soul, rock, and pop songs. The excellent documentary, Suzi Q, was released in 2019. Because of the attention it’s received, she’s now signed to do a movie of her life.

Suzi remains a major creative force to be reckoned with. Her famous quote says it all, “I will retire when I go on stage, shake my ass, and there is silence.”